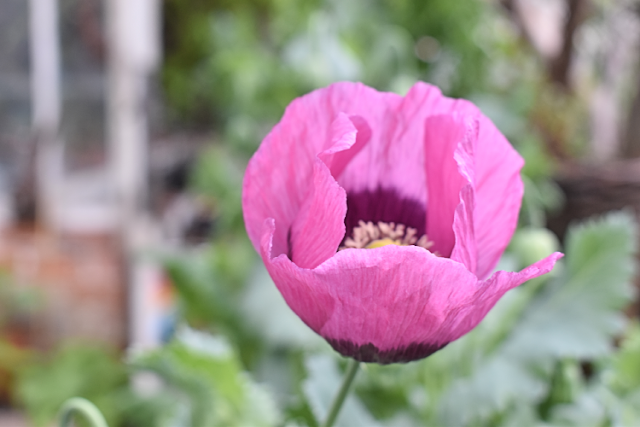 I was delighted to find lots of self-seeded opium poppies coming up in my greenhouse a few weeks ago and decided to leave them where they were to flower, I had nothing else to put into the bed at that point so may as well see what happens. 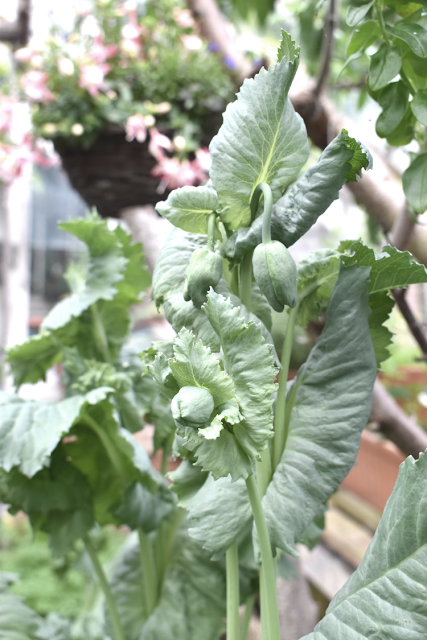 These poppies have turned into triffids! The tallest is around my height (5ft!) and all of them have 4 or 5 flower heads on them. They're quite extraordinary looking and I'm just hopeing they'll all come into flower at once... 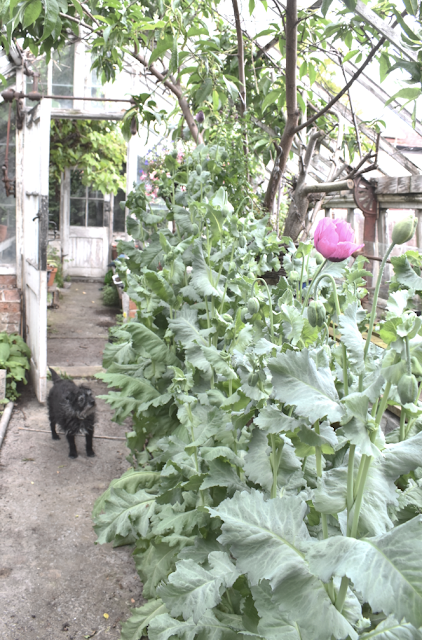 Opium poppies are illegal to grow in some countries a sthey're considered narcotics, so I was quite interested to find out a little more about them and why they're self-seeding so prolifically in my garden. I think the most likely answer is that they've arrived by birdseed via pigeon droppings after having left a much smaller poppy last year, once blown into the greenhouse they've got just the conditions they'd be used to on the continent and they're a good 2 foot taller than the ones outside.

They're mainly grown across the world for poppy seeds (the lovely kind you find on bread) and of course most known for producing opium for the pharmaceutical industry. There are also some bred purely for ornamental reasons. The opium comes from milk which is extracted from the flesh of the fruit after flowering. I'm hoping to dry them to make a nice display and also get a few poppy seeds.

If you're a fan of Game of Thrones you'll be very aware of 'milk of the poppy' being referred to every time anyone's been injured. When I get a chance I'll add some pictures of the milk which bleeds out when you slit the buds.

Use of the opium poppy antedates written history. Images of opium poppies have been found in ancient Sumerian artifacts (circa 4000 BC). The making and use of opium was known to the ancient Minoans.Its sap was later named opion by the ancient Greeks, from where it gained its modern name of opium.

Many modern writers, particularly in the 19th century, have written on the opium poppy and its effects, notably Thomas de Quincey in Confessions of an English Opium Eater.
The French Romantic composer Hector Berlioz used opium for inspiration, subsequently producing his Symphonie Fantastique.

Tweet me or tag me in any poppy pics you have - would love to see what you're growing or anything you have made with poppy seeds.

The first of my huge self-seeded opium poppies has bloomed... what a beaut!