Where would I be without blogging? 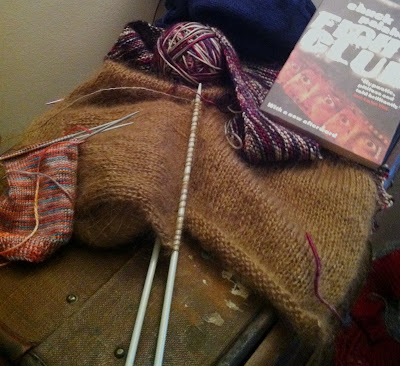 Guest post, written by Natalie Howells of Misadventures in Craft

Just over a year ago, I picked up a pair of knitting needles for the first time (ok, I’m ignoring the fact that apparently my mum taught me when I was little, as I have no recollection of this!) and made the ubiquitous beginner’s garter stitch scarf.

My second scarf, for my brother, went slightly differently than I was expecting. I’d only bought one ball of yarn, as that’s all my scarf had taken, and I’d cast on the same number of stitches. Of course, my scarf was aran/worsted weight and I’d bought chunky for Richard’s, so you can see that it was never going to work out quite as expected. 3 emergency yarn purchases later, I had created a ribbed scarf that can pretty much stand up on its own.

Despite this small mishap, I’d discovered that I enjoyed this knitting thing, and wanted to continue. But I needed more information if I was to get any further. So I cast out into the ether of the world wide web and soaked up as much as I could...

And that’s where I discovered blogs. Knitting blogs. Hundreds of them, with real people out in the world making beautiful things to which I could aspire. Not just information about yarn weights (if only I’d known!) but also different fibres, colours, textures... The world of knitting opened up beyond jumpers, scarves and blankets.

Many of these colourful, crafty spaces had mentioned something called Ravelry, so I joined and got swept away in the possibilities.

With no concept of what was hard and what wasn’t, I jumped straight in and got going.
Reading knitting blogs showed me a world where handknitting a pair of socks wasn’t a crazy idea, where spending money on good, project appropriate yarn rather than scratchy cheap acrylic really did make a difference, and where people shared ideas and encouragement.

Pretty soon after finding knitting and knitting blogs, I found my own voice. I started a blog, tentatively and with the expectation that only my mum would read it. Having my own blog gave me the confidence to leave comments on others. In return, comments started to appear on my blog (and I can’t tell you how excited I was by that very first one!), starting a dialogue that encouraged me further, not just in blogging but in my knitting too.

I recently posted a series looking back over my early projects – my successes and, well let’s not call them failures, how about learning experiences?!  The comments I got were wonderful, talking about how much progress I had made in one short year since picking up that fateful first pair of needles. But I never would have realised my absolute love for this craft, or discovered the possibilities, without reading and writing about it through the world of blogging.

I’d see people posting pictures of wonderful knitted socks, so I tried making a pair myself. I saw beautiful garments, so I knitted a jumper. I’d never even considered shawls before seeing them on the blogs that inspire me, now my queue is full of them.

Of course, it’s not just the inspiration of seeing the incredible projects pictured on other blogs that propelled my progress; it’s also the invaluable commentary that accompanies them. The information that a certain pattern isn’t very well written, or that this particular yarn is frustrating and splitty. The descriptions of trials and tribulations when trying something difficult for the first time... Learning how other people go about their projects helped me to define how I knit, that I love the process but halfway through I just want the product, that I hate knitting with cotton (a sentiment I have discovered is not unique to me!) and that sharing my projects with the community I have been welcomed into is now an integral part of the knitting for me.

So, where would I be without blogging? Well, I’d probably still be wondering what went wrong with my brother’s scarf! I certainly wouldn’t be heading into a second year of knitting, with a sizeable stash and more projects in my head than I possibly have time for. I wouldn’t have made some wonderful online friends and I wouldn’t be writing this post and hoping it resonates with you too.
craft blogging misadventures in craft natalie howells reasons to start a blog