Craft Blog UK regularly features UK bloggers, asking them a few questions about their experiences of the blogosphere so that we can all get to know a little bit more about their craft and why they enjoy blogging.  Please get in touch if you have a favourite blogger that you would love to see featured.
This week we will be looking at http://lucykatecrafts.blogspot.com

"A couple of weeks ago, I was in the mood to do something crafty. "
That quote was taken from the opening line of a post from this amazingly successful craft blog.  The words jumped out at me because I honestly believed that Amy of Lucy Kate Crafts was never out of the mood to do something crafty!  Her stellar blog is approaching 1000 followers and it's easy to see why people love it. The quality of  the posts, beautiful photography and also the many easy to follow softie tutorials that Amy has amassed over her 3 very busy years in the blogosphere all make this blog an excellent read.

I asked Amy a few questions about her blog...


My first ever blog post is here, http://lucykatecrafts.blogspot.com/2007/03/my-name-is-amy-adams-and-i-run-lucykate.html  I had no idea if anyone was going to read it at the time but it seemed obvious to start at the beginning and write about my design background up to that point.  The work I featured is very different from what I do know as it was all from my time as an in-house designer with Coats Crafts UK, I worked there for 12 years and it mainly covered counted cross stitch, tapestry and embroider kits.  It came about because I'd submitted a project to be featured in a book, 'Making Stuff for Kids' by Black Dog Publishing and they had asked if I had a website address, I didn't, and back then knew nothing about building my own site or html coding, so decided to start a craft blog as a way to get myself online quickly and easily.
Where do you promote your blog posts?

To be honest, I don't really promote new blog posts as much as I used to, but if I have posted a tutorial, I will contact other sites where I have been featured before and send them a link.  The best way of promoting your blog is to become part of the whole blogging network, join forums, swaps, flickr, visit and comment on other blogs.  I find with blogging, you get back, what you put in. 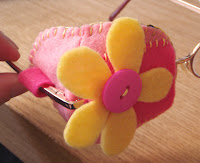 Eye Patch Tutorial for Occlusion Therapy
In what ways has blogging affected your crafting or business?

Blogging has had a much bigger effect on my crafting than I ever expected it to.  There has been so much that I've seen, and people all around the world that I've connected with over the last 3 years, it has become such a rich and valuable experience.  Opportunities have also extend themselves, which otherwise may not have come along, some which I've blogged about, and some which I will be blogging in the future.  It has also made me look at my work on a worldwide scale, in that the majority of hits on my blog are from both north and south America rather than the UK, so much so, that I added a translation widget to the sidebar to accommodate a wider variety of readers and languages.

Have you made any blogging mistakes?

It's not a mistake as such, but posting personal details can prove to be a bit hit or miss.  When you start blogging, it's a good idea to make a decision as to how personal you are prepared to go, and by personal, I mean blogging about family and friends.  Many craft bloggers also post about their children, birthday parties, outings etc.  I have made a conscious decision to keep these kind of posts to a minimum, and to concentrate my focus as craft based.  Another point which always concerns me is when I read posts which talk about the blogger going away on holiday.  I never post about being away from home until after we've been as it's never a good idea to advertise the fact that your house will be empty.

Do you have a favourite blog by another crafter - what makes their posts stand out for you? 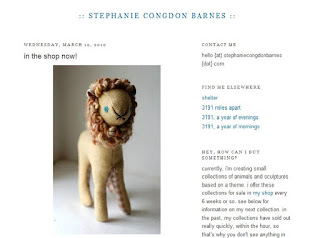 I have quite a few favourite bloggers, the top one would be Stephanie Congdon Barnes (http://stephaniecongdonbarnes.blogspot.com).  I first came across her old blog, Little Birds and her work about 3 years ago and fell in love with her soft sculptures because of their whimsical design and the beautiful fabrics Stephanie selects to work with.  She has recently announced that she is stepping away from the sewing for a while, which is sad, but I look forward to seeing her work continue as she explores other mediums.

Of all your blog posts which one are you most proud of and why?

It would have to be the eye patch tutorial, without a doubt!  http://lucykatecrafts.blogspot.com/2008/02/eye-patch-tutorial.html  My daughter has poor vision, she is severely long sighted, has astigmatism and also a squint.  For 9 months we had to do some patching, 2 hours each day to exercise her weaker eye.  The hospital gave her the stick on eye patches, but quite quickly, she refused to wear them after finding them uncomfortable.  In desperation, i googled 'eye patch' and saw many versions of fabric ones you can buy, but also thought I may be able to do better myself.  She loved her new patch, and 9 months later, the patching stopped and her weaker eye was much improved.  Two years on from that post, it is still my most visited tutorial (and I've done 10 altogether), and I get emails weekly from grateful parents who have used the pattern for their own children as well as adults with vision problems who have made a patch for themselves.  [My own daughter has only just narrowly escaped having to have patching treatment, It was looking likely last year so I showed her this tutorial so she could see how pretty a patch could look too, she loved the idea!]

The latest news about Lucykate Crafts is that there are two patterns, a Peacock and a Stork mobile included in the book 'Little Birds', by Stash, part of C&T Publishing, which is coming out in June.

And also, I have also recently launched, to run alongside the blog, my own Lucykate Crafts website, http://www.lucykatecrafts.co.uk  There is a blog post covering tips on how to build your own website which may be useful, http://lucykatecrafts.blogspot.com/2010/04/some-tips-on-building-website.html
I'd love to hear your thoughts about Amy's blog - just leave a comment below. I use the disqus comments system - you can use the open id to log in with your usual blogger details or just post as a guest.
Featured UK Craft Bloggers Lucy Kate Crafts