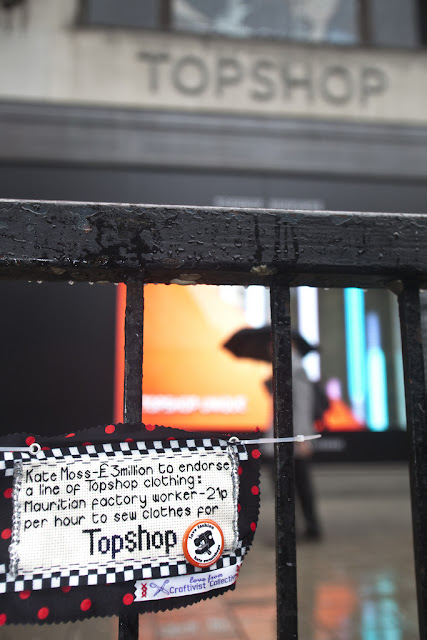 Changing the world one stitch at a time.

What is craftivism? This is a question I was faced with a few months ago when I met Sarah Corbett, founder of the Craftivist Collective.

The simple answer is Craft + Activism = Craftivism.  I discovered the craftivist approach is one I'm actually very familiar with...  it's the same as my approach to social media marketing.  The focus is on engagement and not pure numbers, or as your grandmother might have said, look after the pennies and the pounds will look after themselves.

I asked Sarah if she would be happy to answer a few questions about Craftivism and this interesting organisation. She responded with these intelligent and passionate answers. As fellow crafters (that's you reading!), I'm hoping, that like me you will also be charmed and perhaps a little inspired by this fascinating approach to raising awareness of very serious local and global issues.

"A spoonful of craft makes the activism go down"

I've read the wiki entry on Craftivism, but can you give us the Sarah Corbett definition of Craftivism

For me it's a few things. First of all the activism is always the priority and the craft is the tool to do it. It's about provoking thought and discussion on issues in a deep, meaningful and long term way and a way for people to think personally about what they can do to be part of the change they wish to see in the world as well as how they can nurture and encourage others to make positive change.

For the maker its a method of activism that I call 'slow activism'. Traditional forms of activism tend to be quickly signing petitions, going on marches or being part of stunts. I burnt out as an activist because I was doing so much so fast and I felt like I was just a robot. Craftivism really helped me stop and think about what the issues mean to me and made me reflect deeply about who the injustice affected and how we can all be part of solving them. 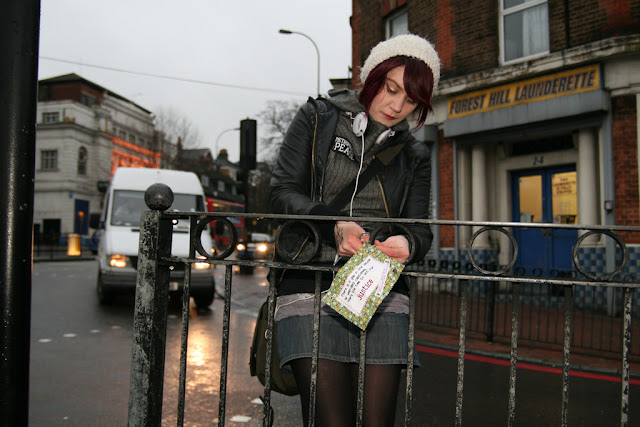 Sarah attaching a Craftivist Collective mini banner to a railing

I find it easier to say what craftivism isn't rather than is:
We want our craftivism pieces to be cherished and people feel excited when they have found our small street art pieces in the street- people are more likely to share their experience/images with friends and contacts if they have felt they have found something rather than being moved out of the way by a giant banner they can't ignore.

We don't demonise people in any of our craftivism projects, its' always encouraging people to be their best selves and challenge them in a loving, respectful, emotionally intelligent way. We've found that shouting at people and telling them what to do doesnt really create long lasting change in peoples hearts and minds.

We try and make all of our projects encouraging, positive and create dialogue not tell people what to do. In a way we are a reaction to clicktivism, slacktivism and aggressive forms of activism. For us craftivism can be done on your own or in a group and its done quietly and slowly. When we craft we often do it in public so people can come and ask us what we are doing but we never push what we are doing on people. We let them initiate the conversation. 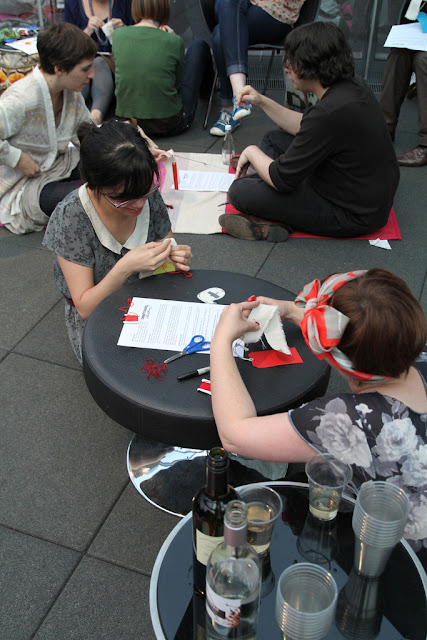 Craftivists at the Haywood Gallery

How did the Craftivist Collective come about?

Organically and by accident = the best possible way ;p

I started doing Craftivism in 2008 when I felt like a burnt out activist, I didn't feel like I fitted into other activist groups (I'm not a natural extrovert, I don't like demonising people, I prefer discussion to telling people what to do, I don't ride a bike, I'm not vegan, I love fashion and craft) and didn't feel fulfilled, empowered or energised doing traditional forms of activism. Plus I'd just moved to London for a job and didn't know many people and I was working 80 hr weeks so needed to leave the office and have a hobby!

I Googled 'craft and activism groups' and the term craftivism popped up. I contacted Betsy who coined the term and asked if there were any groups I could join or any projects I could get involved in. At that time there where neither so I started creating my own projects and documenting them on a blog called 'A Lonely Craftivist'.

I'm not an experienced or talented blogger so I didn't tell anyone about my blog except friends but within 6 months people had contacted me asking if they could join in all over the world. I set up a meeting in The British Library cafe for 10 people to join me to come up with the name of the group, manifesto and what the group would look like.

We made sure that our projects could be delivered any where in the world by individuals or groups and that they could be shaped to fit local political context but also be a mix of campaign speific projects as well as timeless projects too, since us craftsters are normally a busy lot with lots of projects on the go. It has really come about by people showing a need and wanting to get involved. We never push anything out (because it makes me feel uncomfortable) so every Twitter follower has found us etc = amazing :) 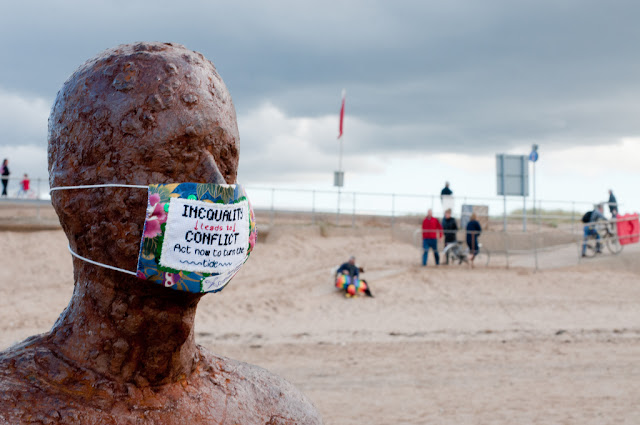 Was there a specific incident or event where you first felt compelled to publicly act on your beliefs and raise awareness of an issue.

Ooo that's a hard question because I can't remember a particular incident. For me it's always been a burning issue ever since I was little. I still get upset watching the news seeing stories of local and global injustices. But I am still very optimistic that our world can be a beautiful place for all to love and be.

I love seeing people create beautiful things in our world and know there is more potential for it to be a wonderful place. I hate seeing inequality and people being mistreated and not being supported to fulfil their potential and enjoy life.

I'm from West Everton which is sadly still the fourth most deprived area in the UK. Everton is very close to the city centre of Liverpool. There is a photograph of me aged 5 with my beaker sitting on the wall of a family sized house with local residents trying to save it from demolition to make way for a park that the community didn't want and would make the area even more unsafe whilst also pushing residents out to surburban areas where they would not be near family and struggle to see family.

My parents have always been part of local community groups campaigning for better housing, health centres for the area as well as buy fairtrade coffee when it used to taste really bad! My dad is the local vicar and my mum was a nurse but is now a local councillor so maybe it's in my genes! :)

I've been lucky enough to go to Kenya and Ghana with my previous roles working for INGOs and also went to South Africa as a family as part of my dad's sabbatical. I've seen injustice locally and globally and my brain and heart won't let me forgot those people I've met and the injustices I've seen. 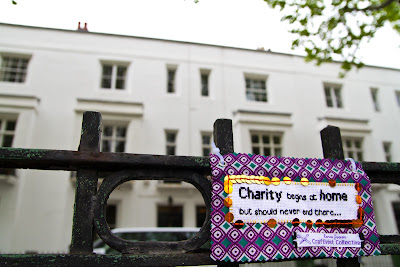 You seem like a really brave, independent lady! Can a country loving, meat eating, wine drinking, mother of two become a Craftivist?

Totally! we need you guys more than ever. We need to show our friends, politicians, businesses, media etc that we all care about injustices and all want to live in a more beautiful world and we won't let each other be part of the problem but encourage each other to be part of the solution.

Craftivism is open to everyone especially those who don't feel they fit in to traditional activist circles. I eat meat (try and lessen how much and only eat free range/organic mind!), drink wine and that doesnt make me less of a person. If activism was just for the purist traditional fringes we sadly won't see a more just world.

We need to show everyone cares and you don't have to fit a particular mould. We welcome everyone. The beauty about craftivism too, is that you can do it in your own time on your own or in a group. I love doing projects on trains and its a great way to have great conversations with people because you will always get someone asking what you are doing and you can tell them and then ask what they think and have a great conversation.

We need to remember that everyone is unique and complex and has their own passions, skills and networks and they can be used to be encourage others and each other to be the change we wish to see in the world, use our passions and talents for good, not just turn into another activist robot.


I don't think shouting at people with placards really changes hearts and minds, but a critical friend can and we all have friends we can be critical of in a loving way. 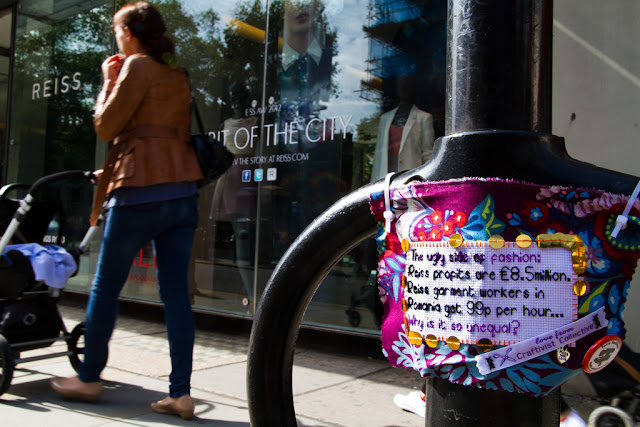 I'm independent yes but brave no- I quietly do cross-stitch, I'm not an extrovert, I'm not brave enough to push out our stuff to other bloggers (which I should do if we want to spread our message and provoke discussion but I"m too scared and it makes me uncomfortable), I do a lot on my own because I like my own company in more doses than being around lots of people, so I have a lots of flaws and need to be braver in many ways.

Thanks Sarah! - I hope that you enjoyed reading about Craftivism - I've written a list of places where you can connect with this organisation, just a like or a tweet to show your support will help Sarah to spread her messages.