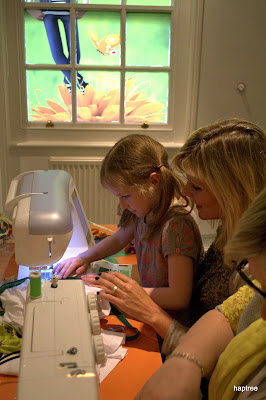 I was really pleased to get a rather exclusive invite to a crafty evening with designer Linda Barker (of changing rooms fame) last night, especially as I was able to take my little girl, to join in the fun.  Here she is being taught how to sew using Linda's amazing machine (that has no pedal?) - it's a Brother, a 'big' brother! The sewers among us were all a little bit envious...


Linda has teamed up with Fanta, the fizzy orange company, to create a downloadable Crafty fun pack that will encourage kids, teens and their parents to get creative this summer, it's super zesty and bright.

They have recently released a new recipe which has natural flavours and real orange juice in - tastes the same as I remember it and they haven't got rid of the fizz, so it was a real treat for Edie - I'm usually a bit strict about 'pop'. 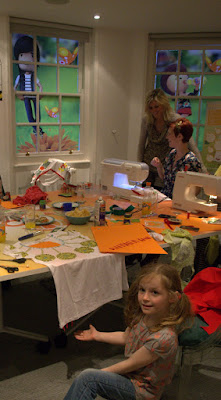 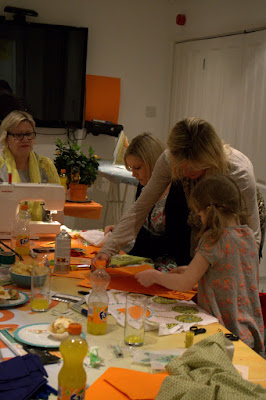 The fun pack has ideas for customising T-shirts, making cakes, fizzy fanta jelly and lots more ideas for getting people to spend some 'quality' time helping their kids making some fun stuff - that's something I know that a lot of the craft bloggers in this directory are passionate about. I really liked that they didn't at any point suggest the drink was really healthy, rather a treat to be enjoyed now and again. We did come home with a few bottles though, so lots of treats this weekend, I may even treat myself to some real fizz ;)

Also invited were Lucy from Lulastic (who I was so pleased to find out is a #cbuk tweet chatter!) and 'Mummy Bloggers' Kerry from Multiple Mummy , Lizzie from  'Me and My Shadow' and Liska from 'New Mum Online' - we were also joined by some lovely ladies from Lexis (the brand agency people) and the Fanta brand team (Edie and I thought they should be called 'Fanta's little helpers!' hee hee)  There was also some excellent food, including cakes from Linda's recipe in the fun pack.  (are you jealous yet!)

We were set the task of customising a plain white t-shirt with stencils, fabric, ribbons and beads - Edie put me to shame, the t-shirts she designed were fantastic, and she had no help other than with the sewing machine and the spray mount, she was on a mission! (she has also now discovered spray mount, need to lock my craft cupboard up I think!) 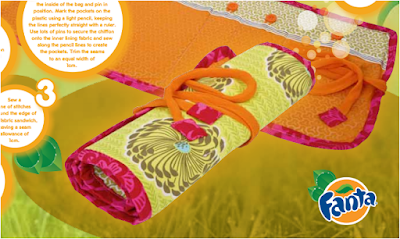 Edie wants to make the little toiletry bag first, we came home with a bag stuffed with the left over Amy Butler fabric, exactly as pictured (well done Edie, a nice bit of eyelash fluttering I think!)  I'll have to let her loose on my sewing machine this weekend and have a go (will I be able not to try and take over? going to try and just offer advice, I promise - she's shown she's perfectly capable!) - I'll have to have a stool for the pedal to sit on as she's very small!  I'll post a pic when it's made :)


Mine went a little wonky, as you can see by my perplexed face at the machine.. I was on the slightly less intimidating machine. 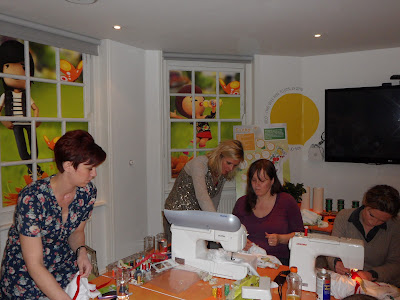 Mmmm that's not quite what I intended! My t-shirt applique's all puckered up (to put it politely!) 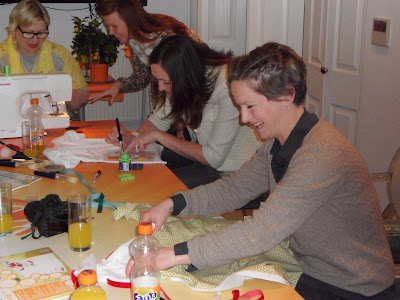 Oh dear, I've gone all silly because someone pointed a camera at me! 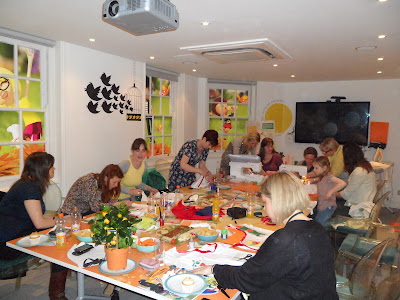 Getting some expert advice at the machine! The room was completely Fanta branded, including mini orange trees, table and window stickers, it looked great. 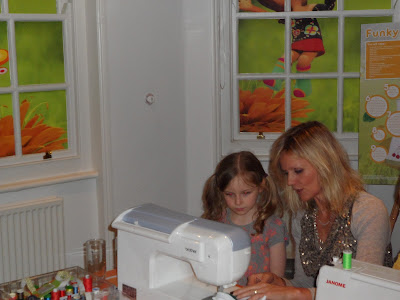 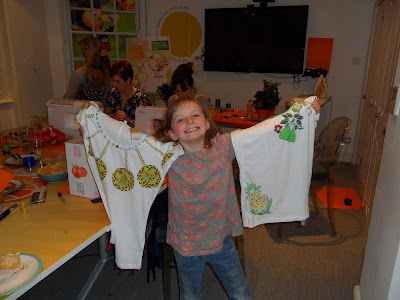 We had a fantastic time, taking Edie on an exciting after school trip into London was a real treat (cannot wait until she's old enough to stay out a bit later!) and we came home with a tandem SPACE HOPPER and family tickets to Thorpe Park (weeeeeeee!) - the prizes for the best t-shirt, Edie's clearly, not mine! I'm very glad I took her. 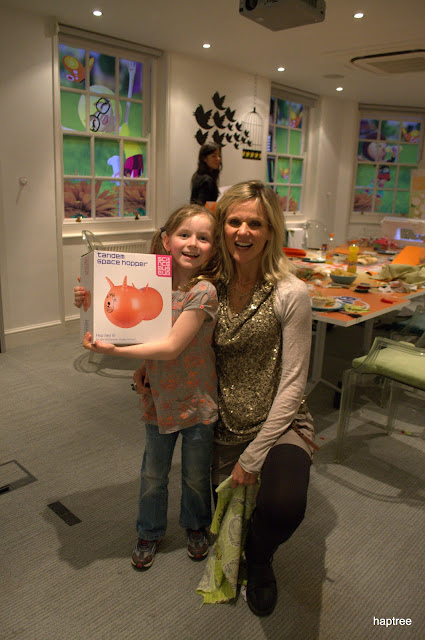 Edie's going to take this picture into school to show her art teacher, along with the T-shirts she designed, she really is very proud of them - and she has named the space hopper 'Zesty' - I think that she may have been influenced by some subliminal messages with that choice! :)

An event like this is fantastic news in my opinion for makers and crafters all across the world, when a company like Coca Cola (they own Fanta) is getting excited about the crafty revolution and employing well known craft and design ambassador like Linda Barker to get people thinking about making / crafting then that has to indirectly boost interest in crafts and the handmade market too, not just sales of Fanta ;)

I hope lots of people who may never have tried making something crafty before find this Fanta fun pack and are inspired to have a go (and then maybe start a blog and come see me here for some advice!)